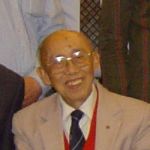 Mr Chung studied in Wah Yan and later on came back to teach. After retirement, he migrated to Australia and set up our association back in the 1970’s. He served as president for a long time until the late 1980’s. He organized and attended many AGMs and gatherings over the years. His last attendance of our activities was in our 2003 AGM. Later on in October that year, Mr Robert Chung suffered from a slight stroke. After release from hospital he moved in with Mrs Chung in a Nursing Home. During the past few years, some of us from WYPSA visited him from time to time. Fr Deignan, Mr George Tam (Principal of WYCHK) and the two student ambassadors also paid a visit to Mr Chung when they visited Sydney.

Mr Chung had completed his life in full at the age of 93 and had left a lot of loving memories in our hearts.